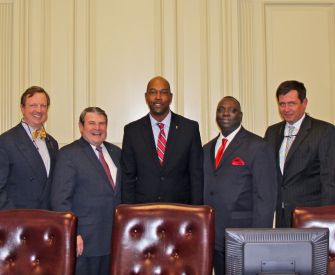 COUNCILMEMBERS SWORN IN AND MAYOR AND MAYOR PRO TEM SELECTED

During Monday night’s City Council meeting, in front of a large audience composed of family members, County Commissioners, citizens and City staff, re-elected incumbent Jay Flowers and newly elected councilmember Terry Scott were sworn in as members of the Thomasville City Council by reciting the Oath of Office.  The Council’s first act in 2016 was then to unanimously vote to elect Greg Hobbs as Mayor and Don Sims as Mayor Pro Tem.

In recognition of his dedicated years of service, the Council also bid a formal farewell to the retiring, long–term councilmember, David Lewis.  Lewis served the citizens of Thomasville for 15 years (2000-2015) as councilmember and mayor.