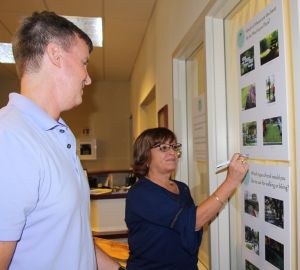 THOMASVILLE, GA – October 18, 2016 – The City of Thomasville has established five locations around the community for citizens to offer their ideas about improvements for MacIntyre Park. The idea sharing is a preliminary activity to the more in-depth improvement planning events that will be held on October 27 - October 29, 2016.

“Having these displays around town is a great way for citizens to participate in the planning session, especially if they will not be able to attend one of the events,” said Brian Herrmann, City Planner. “We hope to have as much community involvement as possible. In order to be sure our final plan for the park is in line with what our community desires, we really need the input from a wide range of citizens.”

Citizens should look for posters and student-built Adirondack chairs to find the place to note your preferences. The locations are:

“The Adirondack chairs and pillows were made by Thomasville City Schools students,” said Herrmann. “The idea to look for ways to improve the park actually stemmed from a class-led project, so it is great to have the students continued involvement in the process.”

Tom Low, urban designer from Charlotte NC, looks forward, to his role on the workshop resource team. Low and three other professionals with varying design skills in landscape, trails, storm water management and green space will help craft a plan for the park.

“It’s our job to take the interests and wishes of the citizens and turn them into a workable plan,” explains Low. “You have three creeks in MacIntyre Park that need restoration efforts for example. The team envisions a park that balances human and natural habitat.”

“It really is an exercise in ‘what if…’ for the park. There should be something for everyone. We hope we hear recommendations for park elements for exercise enthusiasts, children play/learn activities, and public art and more,” adds Herrmann.

The four-day workshop for MacIntyre Park will be held October 26-29, 2016. The event is largely funded by an award from The Citizens’ Institute on Rural Design. TM